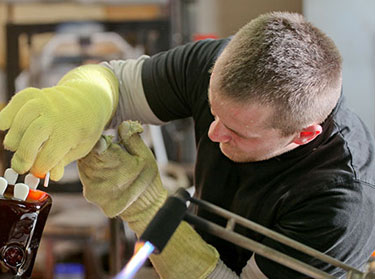 Born into an artistic family in 1981, Stani Jan Borowski grew up around the workshop of his father Stanislaw Borowski and surrounded by art.  As a young child, he was already creating sculptures in paper and in clay.  At age 12, he began to work on his first glass pieces. In 2002, Stani’s artworks were exhibited for the first time at Compositions Gallery in San Francisco.  That same year, he graduated from the conservator program of Kurek Studio in Bonn – Bad Godesberg, Germany.  One year later, the Etienne Gallery showed his work at the art fair “Pan Amsterdam.”  In 2004, Habatat Galleries Michigan added Stani to their roster of artists and exhibited his work in 2005 at SOFA Chicago.  In 2007, Stani graduated from the Institut of Fine Art Ceramics and Glass in Höhr-Grenzhausen, Germany, with a degree in art, specializing in glass.  In recent years, Stani has exhibited his sculpture internationally in numerous exhibitions and at fine art fairs. His work can be found in Germany at the Ernsting-Stiftung Foundation and museum, in the museum of glass in Jelenia Gora, Poland, and in private collections in U.S. as well as in Canada, Germany, Belgium, Netherland, India, Japan, China, Taiwan and New Zealand.In 2010, Stani moved from Germany to Poland to create his unique pieces at his family’s Studio Borowski in Boleslawiec, Poland. In addition to his solo career as an artist, he also works with his brothers Wiktor and Pawel Borowski as one of the chef designers for the glass company “Glasstudio Borowski.”

Stani’s unique sophisticated sculptures come to life in light. He works in almost all hot and cold glass methods including pate de vere, casting and hot blown techniques. His latest works are often combined with materials such as steel, bronze and wood. Stani’s works are inspired by nature – by the material as well as by people and animals he has experienced.  His sculptures tell stories about particular situations that he often translates into funny compositions and characters that delight and entertain the observer. 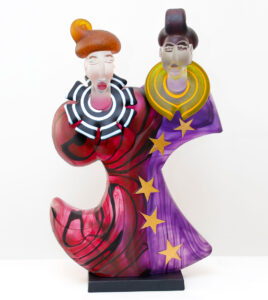