Jonone was born in New York’s Harlem neighborhood to parents from the Dominican Republic. Growing up in Harlem, his introduction to street art began when he would see graffiti and tags on subway cars and city walls. When he was 17 he entered the world of graffiti with his childhood friend “White Man,” tagging his name Jon with the numbers 156 on walls and trains in his neighborhood. He said, “The subway is a museum that runs through the city.”

In 1984, he founded the graffiti group 156 All Starz, in order to bring together their passion for painting trains at night and to help forget about their problems, including drug use. At this time, he met the artist Bando, who was living in New York. Following an invitation from Bando, Jonone moved to Paris in 1987.

“When I arrived in Paris in 1987, people were a little disappointed (laughs) I came from New York, so they saw me as the representative of New York graffiti. While it’s true, I am primarily Jonone and basta! What I did was not representative of what they could imagine, I was more free and technically, I was in the imagination. As I had the technique, I could leave it behind me and create, combine hundreds of information, graphics take shortcuts while leaving me with the flow. Today, I belong to the old school. I work in a comfortable, at ease with lettering or anything else. I no longer have to prove anything: my past speaks for me. On the other hand,

I did not want to spend my time on the claim.”- JonOne

“I have received no arts education. When I tagged trains in New York, I could not imagine that one day I would express myself on canvas. What really got me was the tag to see other painting graffiti all over town.The school to which I was very strict. And so boring! I remember at the time, those on the street were free. I did not want what America offered me: a job, a nice suit and a nice house. I met A-One (Anthony Clark from 1964 to 2001). He used to hang out with Jean-Michel Basquiat (Brooklyn, New York, December 22, 1960 – August 12, 1988). A-one was the link between the street and the world of art. He traveled in Europe and returned with a lot of money, just through his art. I listened to his travel books and my eyes burned with envy. At that time in New York, I was like many today: I was hanging in front of my building. In these times, I either I did not go out of my neighborhood. With A-One, I began to visit exhibitions, to feed my vision of what was happening in this world. I started to take my work seriously, not to consider it as vandalism but simply as art.” – JonOne 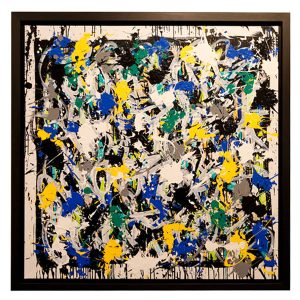 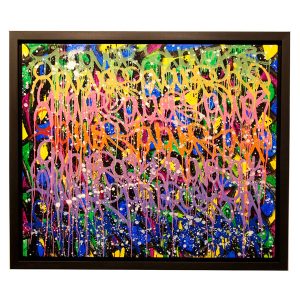