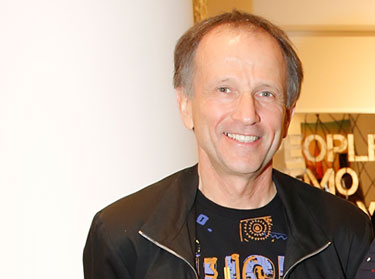 Guillaume Roche, born in Lorient, France, graduated from the National School of Applied Arts in Paris, works in his studio near Paris.

His search for form is based on the transformation of raw material. Energy and eruption are the hallmarks of his works, while his forms are purified and softened by the erosion of time. Calm after the storm!

The Exclos series is born from explosion and blossoming, built on a timeless and powerful universe, directly drawn from the raw material of steel. Artist designs made of stainless steel as

“an expandable energy channeled by a gentle force”.

He seeks the contrast between torn raw forms and polished minimalist forms. His works, with their controlled stability, are at the limit of the fulcrum and invite us into a world where duality is pacified.

Guillaume Roche immersed himself in the atmosphere of sculpture workshops very early on, which he explored with enthusiasm from the age of 10. It is undoubtedly the discovery of a monumental work in stainless steel in the park of the Faculty of Orsay that will be the foundation of her vocation. After graduating from the National School of Applied Arts in Paris, he founded the Pantoplast Sculpture workshop. He collaborates with prestigious artists of this period, César, Dali, Dubuffet, Demiller, Derbré, Garouste, Mittorag in their monumental creations and produces for them emblematic works of the years 1980/1990. With the help of 17 artisans, sculptors, molders, skaters, he produces models, casts, reproductions and statuary enlargements for galleries and national museums.

His attraction to architecture, his taste for the monumental, led him to take responsibility for large-scale projects for the Millet fitting company. There he collaborated with architects like Christian de Portzamparc and worked on prestigious projects: the concert hall of the Cité de la musique, the decoration of the Meurice hotel in Paris or the Parisian boutique Shiseido for the designer Serge Lucens …

In 2003, the city of Colmar commissioned him to make a 12-meter replica of the Statue of Liberty, on the occasion of the centenary of Bartholdi’s death. Amused by the technical challenge and seduced by the gigantism of the project, he accepts this somewhat crazy project. With a team of nine people, for a year they rediscover the spirit of Bartholdi.

In 2005, the city of Valenciennes entrusted him with the creation of an artistic journey around five works, taken from its Museum of Fine Arts, which he will stage in public space.

At the same time, in 1991, he developed his personal work. Marked by the heritage of his peers, he will be directly inspired by their work with the material and in particular by César’s metal compressions. Guillaume Roche, the metal, he wants to heal, explode. From then on, he devoted himself to his own creations. Montauban noticed him during a symposium and bought him his first monumental sculpture in 1995. For ten years he won several competitions, his stainless steel creations would integrate the urban development of French cities: Contrexéville, Montauban, Valenciennes, Colmar, Avrillé, and nearly ten monumental works in Essonne. Invited by the Chinese Ministry of Culture, in 2011, he is an honorary member of the National Sculpture Academy of China, following a series of lectures in Beijing, Nanjing and Chang Chun on the theme “How to treat the relationship between sculpture and the urban landscape? If the institutions so request, the design sphere began to take an interest in his work in 2007 and his first participation in the Paris Design Week. There he met a new audience of interior architects, landscapers and international galleries who bought his large stainless steel sculptures. He became the darling of Italian boutiques. Since then, his works have been represented by galleries in Lebanon, Dubai, Kuwait, Singapore; and he participates in Miami and Singapore Design-Week. 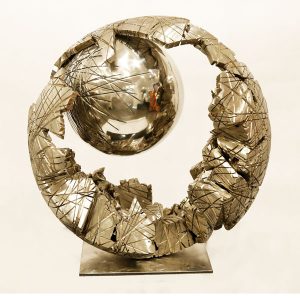 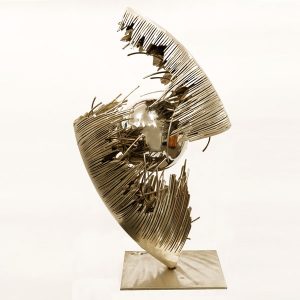