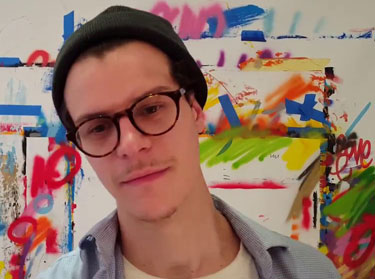 Sab Rico is a French painter born in 1971 whose work brings together pop art and street art.

In one glance, we notice in front of the paintings of Sab Rico, it is the quantity of elements which compose them. No detail is left to chance, no space is left abandoned. Each parcel of his paintings is occupied and has a precise reason to be.

An overpopulated pop landscape where there are countless references. Sab Rico immerses himself in figures of popular culture since the 1950s, assimilates them and gives them a second life by throwing them on his canvas. Together, these characters, anchored in the collective imagination, form a new narrative.

Comics, TV series, movies, cartoons, comics or manga interact and it is not without trouble. Daisy will make Captain America’s eye while Peter Pan leaves the imaginary country for Candy’s. The whole is sprinkled with letters, onomatopoeia peculiar to comics and cartoons.

A cosmopolitan setting, but which is not limited to a magma of references contiguous to each other. Sab Rico puts this popular culture in parallel with the history of art. At the turn of a painting, Dora Maar painted by Picasso will emerge in response to Mickey. The background responds to the form, in addition to evoking the classics of painting, Sab Rico exploits them in his technique. The importance of drawing predominates in his patchworks. There is a thick frame, marked with a black line, which underlines the outline. This process is characteristic of the second half of the 20th century, especially in advertising or comics.

Behind these bright colors and these imaginary heroes, Sab Rico draws on us a disguised critique of our present and globalized society. There are two levels of reading, two possible interpretations in his visuals. He uses naive representations to better awaken our conscience, our morality, creating the shift. A work that does not grow old, have a look at it, we will recognize themes still relevant till date. 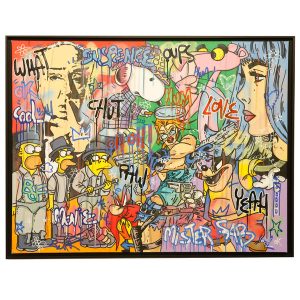 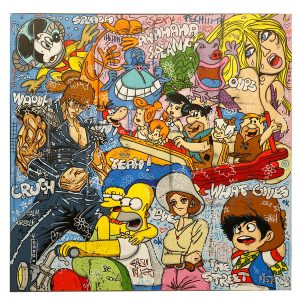