NASTY is an inescapable reference of Parisian graffiti. It begins in 1988 and is distinguished quickly by poignant color frescoes on metros.

After joining the collective AEC (Artiste en Cavale) in 1990, it was in 1992 that he exhibited for the first time in Paris and began the real development of his art.

Its name appears in the tunnels of the metro, on the banks of the Seine and along the tracks.

At the same time, he participated in numerous advertising projects (1964, Mercedes, Bnp Paribas, Burn, Bic, Nestlé …) or in the world of ” artoys ”: Kidrobot and Toy2R in Hong Kong.

In his exhibitions, NATSY stages the famous plates enamel of the Parisian metro which he has taken over for fifteen years.

It also uses the plans of the metro and thus perpetuates the original spirit of graffiti.

His plates were a real success at the auctions devoted to urban art (Artcurial, Drouot …) 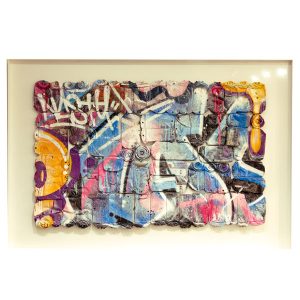