From 1942 to 1950 – with an interruption from 1944 to 1945 during which he volunteered   sculpture at the School of Fine Arts in Paris where he attended the workshops of Marcel Armand Gaumont and Hubert Yencesse. Called as a stylist at the Verrerie d’Arques (ARC International), he moved to Saint-Omer in 1951. After a second hiatus from 1951 to 1958, Claude Santarelli took a new start and adopted abstraction. It begins with assemblies and accumulations of industrial waste: tubes, bars, angles, etc. The iron being not very malleable, he then chooses to work with brass. He was invited in 1965 to participate in the first Quebec Symposium in Montreal and his efforts were crowned in 1970 by the André Susse Prize for Young Sculpture. His contacts with the Parisian jeweler Gennari enabled him to make his first jewelry in 1972. He was married to Sylviane Garnier, manager of a small modern art gallery, rue de Wissocq in Saint-Omer. The city of Tournan-en-Brie paid homage to him by baptizing a school (Claude Santarelli School) and a roundabout with his name, adorned with one of his works (Claude Santarelli Roundabout). His works are currently auctioned off in large auctions. A first retrospective was organized by the Museum of the Sandelain hotel in Saint-Omer from March 24 to April 30, 1973 and a second by the Musée de La Galerie de l’Ancienne Poste in Calais in October 1981. 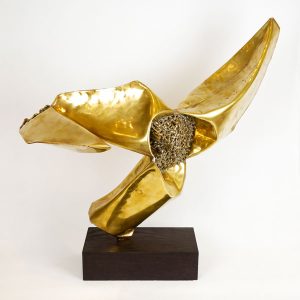